The Lyneham and North O’Connor Heritage Trail is an initiative of the Lyneham Community Association (LCA).

The development of the trail was supported with a 2020-21 ACT Heritage Grant. The LCA engaged historian Ann-Mari Jordans to develop a history of the Lyneham area and four new Canberra Tracks signs and artist Paul Summerfield to develop a wayfinding map incorporating the route of the heritage trail.  The LCA was also assisted by the Hall School Museum and Heritage Centre.

The LCA welcomes contributions of information about the sites included in the trail and about additional sites that could be added to the Trail over time.  The LCA would be pleased to auspice or collaborate with members of the community on future heritage projects.  Please send us an email or contact us via the contact page on the website.

The LCA acknowledges that the Heritage Trail is on the lands of the Traditional Custodians of this part of Australia, the Ngunnawal people.  We acknowledge and respect their continuing culture and the contribution they make to the life of this city and this region.

The land between the Molonglo River (where the ANU now stands) and the Lyneham shops/St Ninians area was colonised by European settlers around 1823.  It was held as part of the ‘Canberry’ pastoral property granted to Joshua John Moore.  The name derived from the Ngunnawal word Kamberra (a meeting).  Although Moore never visited his landholding, his employees grazed sheep and were the first resident Europeans in the Canberra area.  In the 1840s Moore sold this land to Arthur Jeffreys, son in law of Robert Campbell from Duntroon. The ‘Limestone Plains’ Canberra Tracks Heritage Trail provides more insight into early European colonisation of the Canberra area.

Closer settlement policies in the 1860s resulted in the ‘free selection’ of smaller portions of land along the Yass-Queanbeyan Road by small farming families such as the Shumack, Maloney and Read families.  The Yass-Queanbeyan Road ran along the alignment of Mouat and Ellenborough Streets to St Ninian’s Church and then in a straight line to Limestone Avenue and on to Queanbeyan.  The homesteads built on these blocks were relatively close together and the community they formed came to be known as ‘Upper Canberra’ – to distinguish it from the ‘Canberry/Canberra’ area closer to the Molonglo.  Information about many of the places and people associated with Upper Canberra is available on the Rediscovering Ginninderra portal of the Hall School Museum and Heritage Centre.

In the early 20th Century this area was incorporated into the Federal Capital Territory and designated as part of the District of ‘Ainslie’.  The suburbs of Lyneham and O’Connor were surveyed in the early 1950s and building works began on the suburbs we know today. The ‘Looking at Canberra’ Canberra Tracks Heritage Trail provides more insight into the process of  creating a national capital in the rural landscapes of the Limestone Plains. 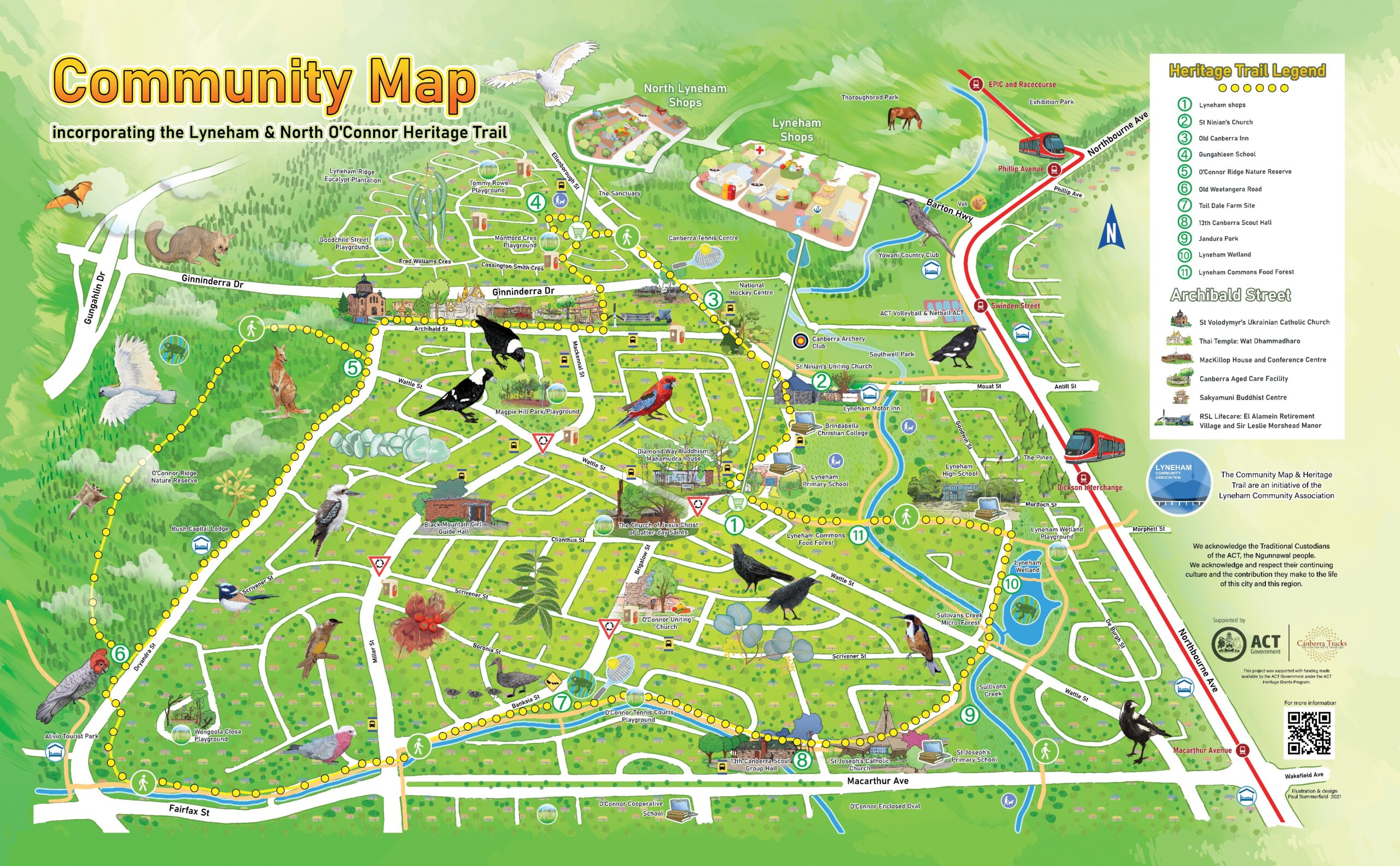 Sources for Lyneham and O’Connor history

Sources for heritage of the ACT and surrounding regions