The Weetangera Road connected the Yass-Queanbeyan Road with the Uriarra Road. It started from the Yass-Queanbeyan Road near the Lyneham High School, travelled along the alignment of Clianthus Street, dog-legged to get to this point on Dryandra Street from where it traversed the O’Connor Ridge before heading west to Bruce Stadium and along the alignment of Belconnen Way to Drake Brockman Drive and Stockdill Drive (near Higgins, Holt and Strathnairn) before travelling on to the Uriarra Road.

The road at this point crosses a low point on the ridge and is mentioned as a track between the Canberra and Ginninderra valleys by 1830.  After crossing over O’Connor Ridge, the Old Weetangera Road descended into the area known as Flea Bog Flat in Bruce. The Bruce and Belconnen area was heavily frequented by Aboriginal groups, with an ochre quarry, artefact scatters and a report of over 300 people camping near the Emu Bank Homestead in 1858 and 1863.

The track was formalised into a road in the 1860s when the Uriarra Road was the main road to the Kiandra goldfields.  The community of Weetangera lay halfway between this point and the Uriarra Road.  By 1881 It was one of the fastest growing communities in the region with 27 farm properties and was about half the size of the town of Queanbeyan.

By the 1960s the Weetangera Road was the main access route from Canberra to the developing district of Belconnen.

Notes on the Old Weetangera Road have been compiled by Action Heritage and can be found on the Hall School Museum and Heritage Centre website. 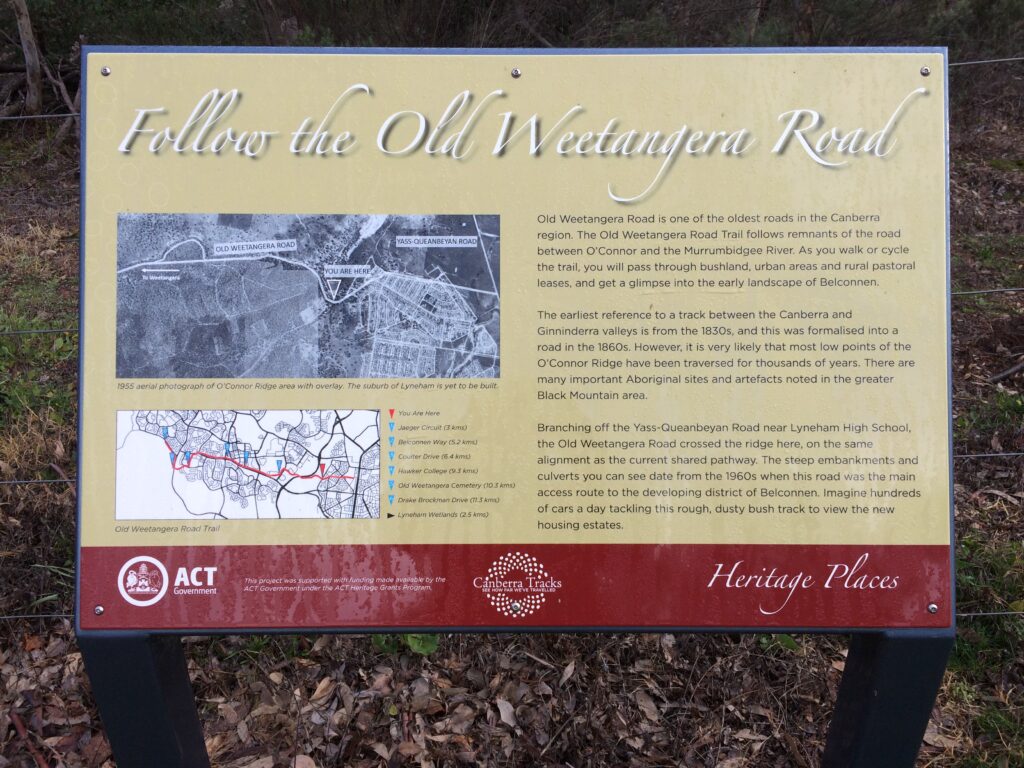